In the festival mood

With Sydney Festival in full swing, I feel bit festive and a bit excited, especially since I'd gotten my desired tickets earlier on in the game and needn't play with the early morning Martin Place queues for Tix for Nix. And then there's all the free events in The Domain - which are always much fun and did I mention free? I've already seen a large majority of the cast of Packed to the Rafters partying along to Al Green at First Night and I'm simply busting with anticipation for Paul McDermott's operatic debut in Candide - much fun, indeed.

Following an inspiring and uplifting performance by the Manganiyar Seduction, the barbeque out the front of the Seymour Theatre, while still fragrant of charcoal and chorizos, was not going to suffice. I mean, after the theatrics of the lights and curtains, the touching expressions of hands and eyes, and the feeling of being treated like kings and queens somewhere else in the world; a sausage on a roll wasn't going to cut it - gourmet or not.

The passionate voices, beating drums and whine of instruments unknown were still lolling about my mind during the short journey to Newtown. It's perhaps no wonder that we eagerly agreed on Kammadhenu - undeterred by their proclaimation of "Sydney's best curries" on the front door and remembering recommendations about their roti. 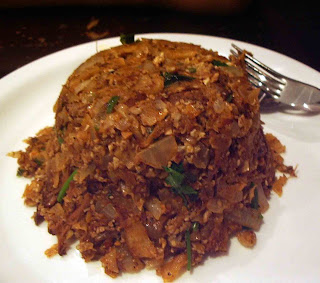 It's too bad we hungrily ordered without in depth-analysis of the menu, but in hindsight, it worked out. The first sight of roti on the menu and we were ordered - but rather the Sri Lankan kothu roti, which in no way resembles roti canai I've sampled in the past. This isn't necessarily a bad thing, though - and as my dining partner pointed out, it was like a deconstructed super-roti featuring beef, shredded roti pieces, onion, coriander, chilli and numerous other vegetables; stir -fried and reconstructed into a mound of rather large proportion.

The 'medium' level of spicing was about the limits of chilli heat for me, but subdued rather nicely by the pieces of roti in the mix. In the end, the dish was a meal in itself and really looked like a chopped gathering of leftovers, but there's some irony in the way it all pulled together intriguingly and spicily. 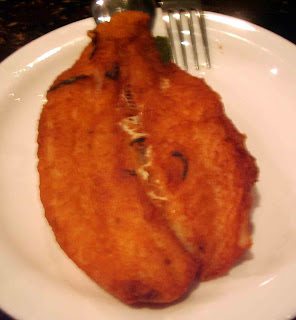 Deep fried fish with chilli
I don't remember the name of the dish (fish p-something unpronounceable) but its golden fried facade evoked thoughts of fish fingers. Whether that's good or bad, it wasn't far off with the nearing dry fish fillet a little lacking in its chilli promise but nicely seasoned nonetheless. 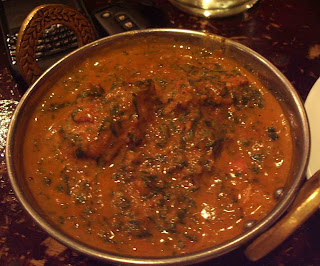 Saag chicken
Sharing dishes in Asian cuisine is a given, although I sometimes feel some competition in ordering the better dish of the table. Not so much a case of dish envy, given everything is shared, but perhaps dish rivalry.

I ordered the saag chicken curry, expecting a distinctly green sauce of blended spinach. It arrives, instead, mostly an orangey brown with specks of green - which is unexpected let alone the heavy taste of cardamom. It's not too hot, but the hot temperature of the dish, combined with the chilli heat from the roti before tortures the tongue into ordering a few more bottles of water. 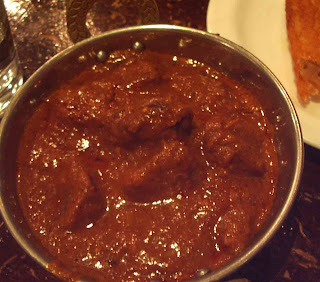 Rendang beef
The other main ordered was the rendang beef; a more expected fiery red hue. While the dish may look plain and unexcitable, this was a wow-dish from the first mouthful of sauce. Zingy and sweet with yielding cubes of beef and a flavour that speaks of hours and hours cooking and preparation, this was a magnetic dish where you go back for thirds and fourths, even when you're not sure your tongue is still attached/working or you're about to explode from satiety. 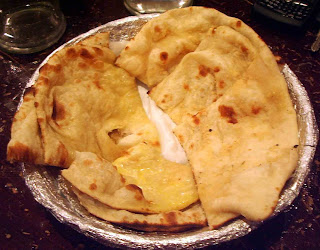 Garlic naan and butter naan
Along with basmati rice copious amounts of water, the chilli fight is well fought with puffy, fresh naan bread - in the garlic and butter versions here. Perfect for sopping up tasty sauces, but certainly scrummy enough on their own too. I like to think I'm reading into the personality of the naan or its chef when I see its blistery and burnt tandoor oven marks on the underside.

During the meal, we note that there's a decided lack of atmosphere in the restaurant; although admittedly, we'd just seen one of the most vibrant and exciting Rajasthani musical performances around, and its experience and memory were still playing in the mind. In fact, I think it still was days later when I'm still in the mood for all things spice, and even random Indian soft drinks I come across. Play on, Sydney Festival.

Looks like you are having lots of fun during the Sydney Festival thus far! The food looks quite interesting too.

Hi joey - Am loving Sydney Festival - as per usual :)

Kammadhenu is one of my favourites! It's usually a packed house though and rarely lacks in atmosphere - a revisit is a must! ;)

Hi Jen - Yep, a revisit is definitely planned - for the normal roti at least!