Blue sky? Check. Sunshine? Check. Healthy appetite? Double check. Looked like everything was set for the annual Sydney Food & Wine Fair for the Aids Trust in Hyde Park as the finale of the SIFF. All that was needed now was a few - okay, several - sheets of vouchers; endurance from the searing sun, whirling winds and cheery crowds; and a drink would be nice too.

As ever, there was no shortage of wine stalls and not-so-subtle references to the Sydney gay community. However, unlike other years (unless I've just been ignorant and remiss previously) there were an impressive amount of freebies from the get go: whole loaves of Abbott's Village Bakery bread; full sized scoops of Ben & Jerry's ice cream; Ferrero Rondnoir samples galore; Mt Franklin carbonated water; and something to do with mushrooms, I think. 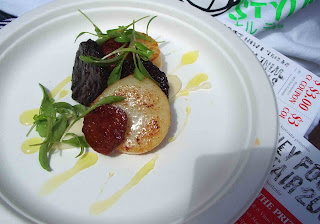 Seared scallops with morcilla and chorizo from Four in Hand
They say 'sex sells' but really, I think that for the foodie this could be revised to 'scallops sell'. Within seconds of spotting scallops on the menu, coupons are being handed over and we can see scallops immediately sent into a hot frypan for the sear treatment. It's then prettily plated with slices of morcilla and the smaller chorizo and drizzled with olive oil.

It takes great strength and willpower to not pick up the scallop in one big, happy mouthful, but then again, these are close to the biggest scallops I've ever seen. As such, they didn't quite have a silky texture but they certainly had the "Mmmm" sea-sweet flavour. I'm still no fan of eating blood and its related products - I struggle with the feel of it in the mouth - so the morcilla is not for me. Chorizo, on the other fork, is just the thing to completely contrast the scallop in texture, intensity and flavour. 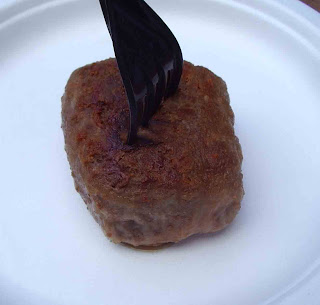 Fagottini di carne - homemade sausages bound with parmesan and
truffle egg from Buon Ricordo
Moments and steps away from the first stall visit was another instant sales word: truffle. It was advertised playfully and loudly by the boys at the Buon Ricordo stall, along with an unmistakable aroma of truffle. This compact block of meat was almost overpoweringly truffled; its crispy savoury meatiness coming a distant second in the flavour stakes.

It's at this point a drink is deemed absolutely necessary, and in seeking one, we take a detour and pause in the Ben & Jerry's queue. I'm not usually one to spoil my appetite with sweets before the end, but free chocolate fudge brownie and strawberry cheesecake ice creams don't take "no, thanks" as an answer. 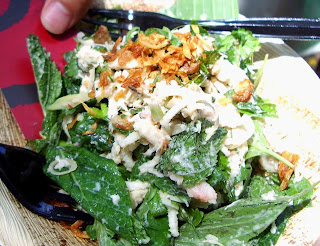 Poached chicken and crab salad from Jimmy Liks
I always find that I'm drawn to the northern end of the park/fair as there tends to be a concentration of seriously drool-worthy stalls there; this year including Jonah's, Quay, Longrain and friendly competition with Sugarcane, and Jimmy Liks with a healthy-looking salad and the deadliest Bloody Mary I've seen, smelt or tasted. Let's just say that namh jim is insane and that the fresh chilli in the salad was relieving in comparison. The salad was liberal with Thai basil, other fresh herbs and chicken breast, but a little lacking in the crab.

It's almost not the Food Fair without a touch of breeze that blows sprays from the Archibald Fountain onto anyone nearby in the right/wrong direction. Chlorinated mist shower with your oysters? At this point, the stomach is given the opportunity to rest as a peach cocktail from Steel Bar & Grill accompanies me on the stroll through the rest of the fair; passing familiar and new stalls, enticing looks and smells, and many a hungry Sydney-sider or their pet dogs.

The fair feels smaller this year - just as packed with patrons but shorter queues and perhaps not as many restaurant stalls or less variety. Is this another thing we can blame on the highly disliked GFC? 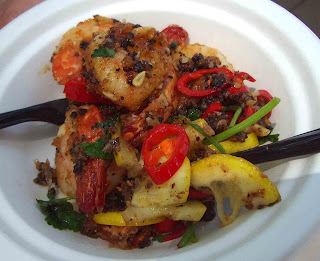 Salt and pepper prawns from Wildfire
The cause for the eating pause ceases at the Wildfire stall, where live prawn cooking and wok tossing action is magnetically attractive. Green prawns are flashed in hot oil and then meet loads of chilli, coriander and lemon in the wok for a measured toss session. There were quite a few prawns in this serving with explosive and impossible to fault seasoning. We were even eating the stray bits of batter without prawn, it was so tasty. 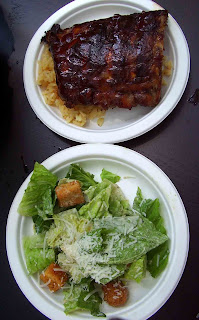 Pork ribs with seasoned rice and Caesar salad from Outback Steakhouse
It's hard to walk past ribs on the grill without inhaling deeply; as if a deep enough breath might get a taste of smokey ribs. Now this was definitely a dish that required seats and a table, which we luckily found and claimed awhile. The salad was fairly standard, although a nice, generous touch on behalf of Outback Steakhouse. 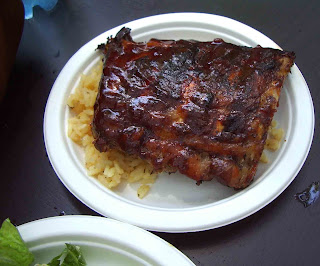 Pork ribs with seasoned rice from Outback Steakhouse
The ribs were appropriately mini-portioned and break-apart tender - oddly a very good outdoor, festival dish. Sucking meat clean off the bones, licking the sweet barbeque sauce from one's fingers, all outdoors under trees and sun has some primal, cave-dwelling feel to it. Thankfully the rice, salad and expanding stomach remind me of some humanity and civility.

The green green grass of Hyde Park beckons the mentioned expanding stomach - a lie down in the sun is ideal as a palate cleanser, although perhaps not in regards to digestion. But it seems like the trend, as most every patch of shaded grass is inhabited by people, picnic blankets and plates of food. 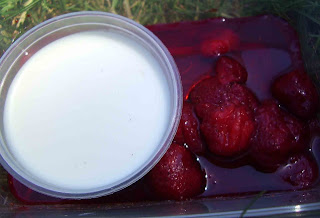 Coconut pannacotta with strawberries from Ravesi's
With coupons still to spend, it turns to discounting and some slightly unorthodox sales techniques by the flamboyant 'girls' at the Pink Salt stall. I score a discounted dessert from Ravesi's, which is a stunning coconut infused pannacotta with equally impressive strawberries in syrup. One mere mouthful was instant happiness, cheerfully right down to the final drop of syrup. 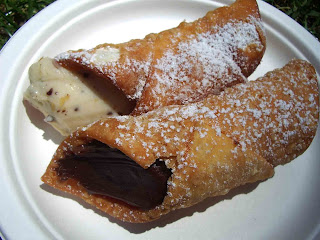 Ricotta and chocolate cannoli from Sweet Infinity
The piles of cannoli at the Sweet Infinity stand are fast moving but unfortunately a little softened, due to either half a day spent outdoors or that fountain spray. Nevertheless, the ricotta was the attention hog, stealing the limelight with its citrus peel and and creamy taste compared to the chocolate custard.

Entrees, mains, desserts and drinks had been had - and a few times over even. With everything spent - coupons, energy, stomach capacity - it was time to roll over and contemplate another year's Food Fair gone by. Which means it's getting towards the pointy, scary, intense end of the year when reason and calmness start edging towards the window, and love and war have it out with each other.
Posted by Tina at 8:00 AM

Oh man. To have been there several hours earlier, when most of that great food was still around.

Looks like you had a great day of food. Shame I wasn't about to catch it but still enjoyed what little I did :)

Hi Simon - I've learnt my lesson: get there early. It was a lovely day and a great way to cap off the month :)

Great coverage! I was so disappointed I missed out on the scallops - by the time I spotted them I'd used up all my coupons =(

Hi Jacq - Yes, there weren't that many scallops but so many stalls had oysters!

Lorraine @ Not Quite Nigella said...

Ooh those ribs look so good! And yes for festival food it needs to be soft and easy to pull off. I wish I had gone! :)

Hi Lorraine - Yep, it was very cave man for a moment as I was walking and cleaning meat off bones :)