Conclusions of a cool cow

I've had my first cold of the cooler season; I've had a few thoughts about finding my trench coat out from the depths of summer clothes; I'm having soup at lunch - it's officially cold weather season in my books. Despite still pleasant daytime weather, chilly before and after work temperatures have decided it for me - the end of fun and sun is here.

So too the end of the March into Merivale festival - which has surely run for longer than the month of March. I thought I'd make the most of it and hit up a Merivale feast one last time, with a Friday night reservation at the flashy and bright Mad Cow. It's a fun space, but not one I can imagine for dark suits and business conversations - though I could be grandly mistaken. 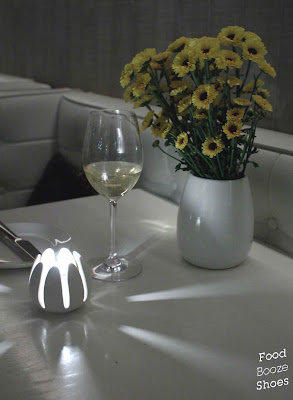 Table setting at Mad Cow, the ivy, George Street Sydney
It's funny how many times I've teetered, drink in hand, near by the restaurant, but never actually seen it. It's a surprisingly welcoming interior, all whites and yellows, with comfortable cushioned white booths and the restaurant's very own bar. We deliberate whether the flowers on the table are real or not (I think they were) and eagerly order up. 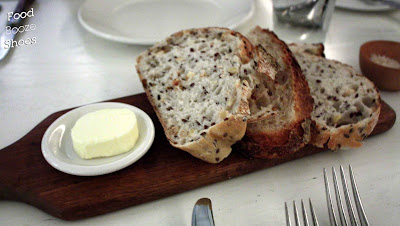 Soy and linseed bread with butter
Bread arrives promptly - a soy and linseed variety that's crusty and toasty on the outside, and soft and seedy on the inside - along with our selections of Chandon chardonnay and shiraz. Granted the cooler weather, I'm starting to tend towards reds - lovely uncomplicated, fruity ones that dance on the palate as lightly , if not more delicately, as a white. In fact, I'm finding more tastes in reds than whites, and thus am appreciating reds more than I ever did whites.

Grilled white scallops, coriander, black fungi, bean shoot, ginger black bean vinaigrette
With distinctly Asian flavours, the scallops are a superb starter - my only regret is not ordering two of these. Crisp, golden topped and bottomed, the scallops were a flavour explosion on their lonesome, telling of the sweetness of the sea. So enamoured with the molluscs, I remember to eat the also Asian-inspired salad side only at the end. 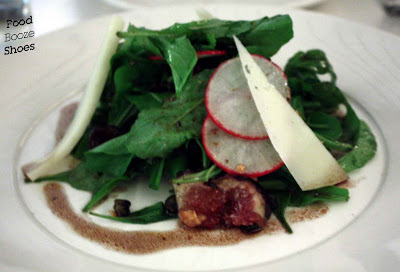 Salad of fig, manchego, radish, walnut, grape, rocket, fig vinaigrette
The salad unfortunately pales in comparison to the scallops, but it's a tough and unfair comparison. Fig and manchego cheese make for a lovely couple, as too walnuts and rocket. The bland discs of radish desperately need the dressing, while the grapes seem redundant when there are ripe figs on offer. 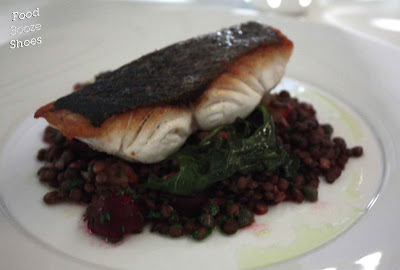 Pan roasted blue eye trevalla fillet, baby beetroot, lentils, eggplant, kipfler potatoes, sorrel
The mains on offer all have equal pull with me - maybe except the vegatarian. It seems to make no sense to not have a beef dish - but I can be quite non-sensical at times. I opted for the blue eye trevalla - the promise of abundant sides and accompaniments winning over what I know are bare plated steaks.

The fish is delightful, flaking away from itself although the skin isn't quite crispy. I adore the lentils and mushy cubes of eggplant. The thickly sliced potatoes seem part of a rewarding treasure hunt but I'm not a fan of the baby beets. So many ingredients, yet I'm not sure if it all really goes together. 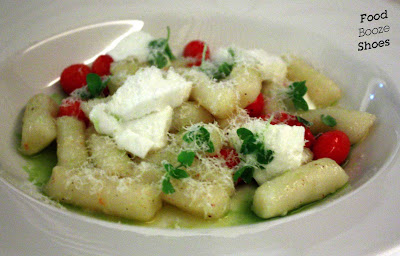 Potato gnocchi, buffalo mozzarella, confit tomatoes, basil, parmigiano reggiano
The potato gnocchi is a colourful dish, traditional and vegetarian in its approach. The tubular gnocchi and fluffy and impossibly light, stopped from floating away with the cheesy, buttery sauce. I'm inspired - for a thought at least - to try gnocchi at home again, although I'm sure a ricer or mouli is going to be on the shopping list. 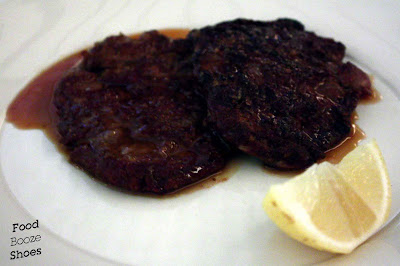 Black angus minute of fillet, 200g, diane sauce
The only beef eater of the meal is faced with two charred fillets and not much more. Decorated with a wedge of lemon and dressed with a thin dianne sauce (cream free?), the minute steak is incapable of being anything but well-done, but tender nonetheless. Sides are definitely needed with the meat at Mad Cow and their absence makes the dish obviously less than satisfying.

While we'd love to linger in the casual cool of the white Mad Cow booths, our space is required so we conclude the night scurrying out of the ivy into the cool night.

The scallops look really good, perfectly seared. I think you made the right choice going for the Blue eye. The steak just looks too boring, actually I can't believe they serve it like that. It doesn't look too appetising.

Hi Mark - I guess you're 'encouraged' to order sides, like Rockpool B&G

Hi missklicious - Mmmm, they were... so juciy and yummy!

the salad does look a little sad looking but the gnocchi is calling to me!

Lorraine @ Not Quite Nigella said...

I really enjoyed my meal last year at Mad Cow but I'm with you on the sides. They should give something at least as it looks so bare when it comes to the table. I know it's to make more money on sides but a bit of salad or greenery wouldn't kill them.