Not my most relaxing Melbourne trip ever, I’m recently back from a planned four nights and three-and-a-half days in Melbourne, which turned into five nights and four days due to Tiger Airways’ “engineering” problems (look out for Airways on Channel 7, who seem to be in cahoots with Tiger).

Airline-induced stress aside, plenty of eating was achieved, sufficient drinking too as well as an obligatory visit to the flashy insides of Crown casino. I’ll round up a few of the smaller experiences together in the next week or so, as well as exciting visits to best restaurants of the year, dumpling havens, best new restaurants as well as some cheap eats and awesome drinks.

For me, no Melbourne trip is complete without a coffee in a laneway, and Degraves Street and Centre Place in the CBD have caffeine stops in abundance, as well as that quintessential Melbourne laneway atmosphere.

Café No. 5 in Centre Place exudes this atmosphere along with a front display cabinet of muffins and the seemingly obligatory panini piles.

Coffee is a near art in Melbourne – I’ve yet to have a bad coffee but maybe I’m not trying hard enough. The piccolo latte here was creamy, even made with skim milk.

Having missed dinner the night before, I had a long fast to break so went with bacon and poached eggs – to be told that the weekend and weekday menus differed, and that neither roasted tomato nor mushroom sides were available.

I settled on fresh tomato and what turned out to be toasted Turkish bread rather than sourdough (another weekday concession) in a just satisfactory rendition of breakfast, with perfect poached eggs and very lean, lightly cooked bacon.

With art adorning the walls, plenty to read and the continuing churn of the espresso machine, you could certainly wile away a decent amount of time here – but for me, more of Melbourne was calling. 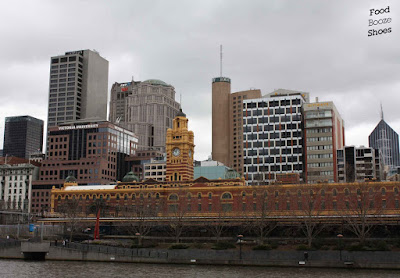 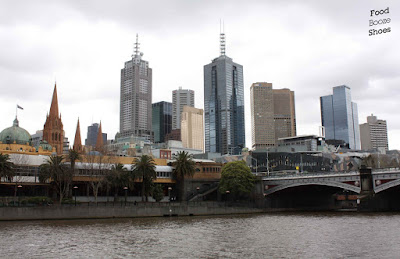 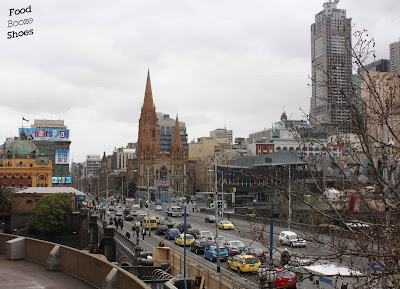 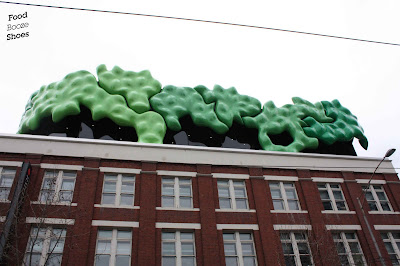 There weren’t really any hysterical scenes at QV in Melbourne CBD, but there were plenty of adorably gorgeous cupcakes in the window at The Cupcake Family. Initially attracted to the Tiffany themed cakes I’d attempted at a Sweet Art class, there were a range of cupcakes of two sizings, and also a small display of cookies and macarons – and definitely no crazy crowds.

Unable to resist some almond-sweet indulgence, we selected four flavours: vanilla, strawberry, mocha and green tea and sat down in the little store to get our sugar highs on.

I immediately noticed that the colours of these macarons were decidedly less dramatic than some local varieties; that is, the black sesame wasn't  boot polish black - not a bad thing considering it's only food colouring.

The mocha has a great heart-starting coffee kick while the green tea also has some serious bitterness amid the sugar. The strawberry was sweet and artificial - just as I liked when I was a little girl - and the vanilla was, well, rather vanilla.

Look out for more Melbourne wraps and restaurant experiences in the coming weeks.

i admire your shots, great photos! you can also find interesting bars at mybirthdayvenue.com. i looked this up when i took my friend for a tour.

Amazing food display cabinet....
Glad the challenge worked out ok for you!
Superb!!!!!

Looking for Function Venues Melbourne? mofolounge.com.au is the ideal party venue to find Function Spaces and Rooms in Melbourne.

I absolutely love these stunning photos. My New Year Eve party was super enjoyable and fun. We attended the best NYE event at the best party LA venue. I like the party venue a lot and would love to reserve the same for our rooftop engagement party.