Fake eyelashes so long and curled that sunglasses were worn halfway down the nose. A pedestrian sprinting across the road in four-inch platform heels. A man walking a charming, little white goat on a leash. A mass of red, white and black, eye-patched, peg-legged people shouting "Arrrr!" in unison. It's Mardi Gras time in Sydney and as much as I love the festivities and general celebration, the mass crowds cramming city streets and footpaths is an absolute turn off.

Sightings of parts of Mardi Gras is enough for me this year as we walk against the crowds in getting to our dinner destination. I feel a little like an explorer going against the tide and conventions to reach unseen parts of the world - that being the less populated end of Dixon Street in Haymarket and a restaurant I've wanted to visit for ages, Uighur Cuisine.

Described as food of the Silk Road, I've tried to explain to and convince companions many a time to eat here with mostly the usual negative responses pertaining to the unknown cuisine of Central Asia and supposed abundance of lamb. Success on my behalf finally finds two of us seated at one end of a large table for eight in the fairly full restaurant.

The crowd is predominantly Chinese but then again I suppose we are in Chinatown still. The menu and signs about the restaurant are written in Uighur, Chinese and English with the staff communicating in all three languages as well. There's very much a family restaurant feel to the place with the young staff reminding me of similar childhood days 'slaving' away with the parents.

We take our time with the extensive, picture-laden menu, flipping over to look at a myriad of meat and vegetable entree and main options, running our tongues over very foreign terms and phrases, and being awed by the $350 whole lamb kebab option. The two of us are regretfully unable to order this as it must be ordered a week in advance.

We finally settle on an order comprising meat, vegetables and carbohydrates and slowly think that we may have overordered as usual. We spy a main dish at the other end of our seemingly communal table that is huge, soupy and platter-sized, looking enough to fill three although that doesn't stop numerous other dishes joining the couple's feast.

As we wait and watch continuous plates of lamb skewers leave the kitchen, the grilled, spicy smell, obvious from when you first enter, further piques our anticipation for the meal. We first whet the appetite with a salad entree - not the gherkin salad that I initially wanted but, nonetheless, a refreshing vegetable respite. 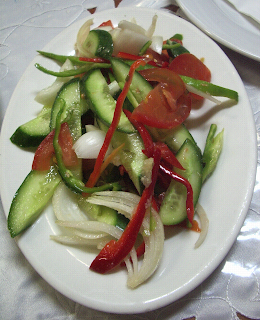 It's a bright, fresh salad doused in a salty, mildly sour dressing. It is a good and necessary accompaniment to the meat and carb fest to follow. Our lamb skewers are the next to make their glorious arrival. 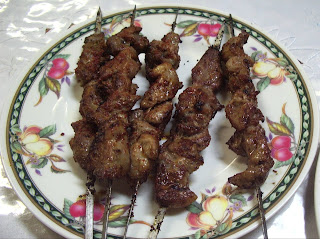 Koy Gosh Kawapi (lamb kebabs)
Five lamb kebabs on potentially dangerous flat metal skewers arrive and seduce with their heady, smokey aroma. There's a distinct spicy cumin flavour mixed with the drool-worthy smell of grilling. It's only seconds before we each grab a skewer and attack it feebly with disposable wooden chopsticks.

My first mouthful is an explosion of flavour, perfectly seasoned with a delightful overabundance of cumin and mild chilli heat. However, as I continue to chew the mouthful I realise that the first mouthful could last forever. It's mostly gristle and almost inedibly chewy. And it's not the only piece. We end up playing a lamb chunk bingo of sorts: grinning and chewing appreciatively when scoring a tender piece, quietly chewing and disposing when otherwise.

For all the chewing I can't fault the flavour. It didn't have any of the smell of lamb that can be off-putting, with just the right amount of spice heat and flavour which, although, stayed for most of the night. 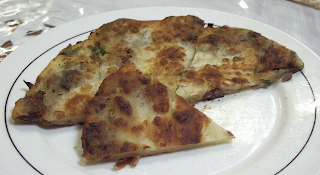 Gosh Poshkal (meat bread)
We also had a serve of the simply named meat bread, which was a satisfyingly crunchy, thin flour pancake - moist on the inside and spotted with fine bits of meat, presumably lamb but possibly beef. The flavour was muted, and even bland compared to the lamb, but a simple, filling dish to have on the side and to have me currently hankering for.

Our final vegetable main doesn't eventuate for a long time and upon asking the waiter, apparently never even made it to the order. At this point we're edging on full anyway so cancel the phantom eggplant dish to a little disappointment. The bill comes to an amount less than most the lunches I have about the city so we leave happily with money for another visit soon I hope and re-enter a city night of gaiety and revelry.