I find it ironic that when there's the realisation that life is fragile and delicate, the natural instinct is to go and do all the crazy, wild things that really stretch life to the limit. Like being told a fine cashmere sweater has its limits and then taking it into a contact sports game. Is it testing the theory of the realisation? Or succumbing to and accepting its inevitability and just making the most of the situation regardless?

Passing through Ashfield was the perfect excuse to indulge in fragile and delicate dumplings as the abundance of northern Chinese eating establishments proffered more than enough to satisfy any dumpling diner. The problem is that there are so many places it's difficult to know where to go. Judging a restaurant by its facade is one way to go but like its literary relation, can be a shallow and partial approach.

At some point on the main road two decidedly Shanghainese eateries sit side by side. Both have the word 'Shanghai' in their names, both are filled with diners at a late lunch hour, and strangely enough they both seem to have used the same sign maker as well. Well, the typeface and style is similar anyway.

Our decision is strongly swayed by the ability to get seating for our entire group at New Shanghai Chinese Restaurant, although the closely positioned tables make me feel a little like I'm sitting with a different group. But never fear, I'm all that much closer to the viewing window where a lady effortlessly creates balls of pleated, thin pastry-wrapped mince, delicately placing them into bamboo steamers. For me! And a large majority of the other diners too.

Window into the kichen at New Shanghai Chinese Restaurant,
Liverpool Road, Ashfield
Her finger movements are mesmerising and she's almost robotic if not for the laughing and interacting with other staff. I know I want a basket of these steamed beauties but the menu presents me with page after page of other mouthwatering options, from hot snacks, fried noodles, soup noodles and other Shanghainese delicacies.

Our decision making and the service takes a little while, but our orders slowly make their way out of the kitchen in no particular order, dumped somewhat unceremoniously at the edge of the table. All of a sudden we decide it's going to be a communal shared meal and help ourselves to cutlery and napkins. 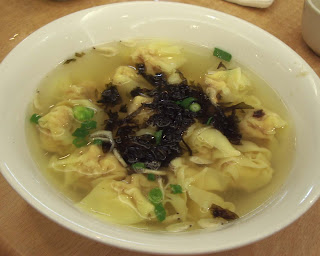 Prawn and pork wonton soup
First to arrive in a steaming bowl was the prawn and pork wonton soup. Small packages filled with tasty minced pork ethereally float the way only wonton pastry does in a light soup. Topped with shallots and strips of dried seaweed, the wonton were delicate on the palate; its filling springy with a whisper of ginger flavour and seemingly missing prawns. Perhaps I just picked an unlucky dumpling? 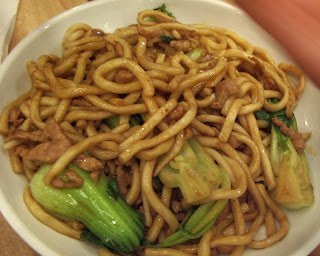 Fried hand-made noodles with pork and vegetables
The first noodle dish arrives next to a now hungry audience. It's very difficult to snap a picture when there are four other hungry people snapping their chopsticks at you and the dish - and especially so when you're sort of sitting on the next table.

The hand-made noodles are thick and covered in a soy based sauce - sprightly but closer to soft than chewy, which is my preference but not everyone else's. The dish overall is a bit on the greasy side but the pork strips and baby bok choy are tender and feel sustaining. 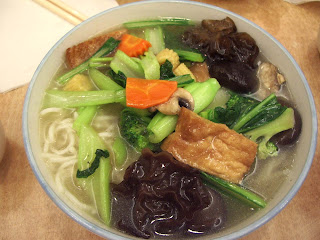 Vegetable noodles in soup
The requisite vegetarian dish is another noodle option - this time thinner white noodles in a flavoursome soup with a fantastic array of vegetarian toppings. The choy, carrot, mushrooms, black fungus, broccoli, baby corn and lightly fried tofu have been cooked in a separate sauce then scattered atop the large bowl of slippery noodles. It's a relatively healthy dish and tastes accordingly.

Pork and shallot pancake?
And then the bizarre and unexpected dish of the day - five golden fried, sesame seed covered balls rattling about on a large white plate. I look confused and ask the waitress what these are and if they belong to our table. She checks and yes, apparently I have ordered these. What I misunderstood to be a pork and chive flat pancake turns out to be these, or maybe I just pointed to the wrong menu item. Rather than sending things back and waiting for the new order, we just shrug and grab a crunchy spherical parcel each and chow down.

The outer casing is shatteringly crisp, concealing a thick inner layer of starchiness - potato or taro-like. Inside this is a minute portion of savoury pork mince filling with shallots. So perhaps this is what I ordered, I thought as I crunched and munched through it. Not too bad for an accident. 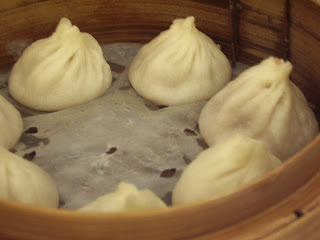 Xiao long bao (steamed little pork buns)
I sight a bamboo steamer basket emerge from the kitchen and it's heading for us! It's our xiao long bao and as you can see I wasn't as quick as others on the table to reach the basket. They're not quite as uniformly perfectly-shaped as other versions but it's more than a little anticipation as I pick up my first dumpling and wait patiently for it to cool a little to avoid burning my tongue.

Not quite patient enough it seems, although my tastebuds have resiliently recovered less than 24 hours post injury. The pastry is slightly thicker than the above mentioned other and I think there's about a one second pause from piercing the skin to boiling hot soup rushing out and encompassing my mouth. The soup flavour is intensely good and I savour it all despite the burning. The filling is a fine mince packed with fantastic flavours that leaves you wanting more.

Last but not least, a good 10 minutes or so after we've finished all our other dishes, the long-awaited pan fried Shanghai pork buns turn up. They look like joyous little bundles and seemingly worth the wait. 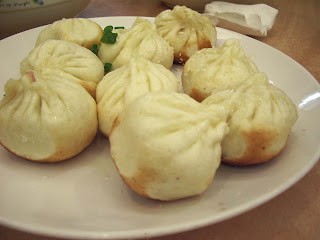 Pan fried Shanghai pork buns
In what could be likened to a xiao long bao on steroids with a burnt bottom, these little puffballs are fluffy and chewy at the top part where the pleats come together and thin and crunchy on the bottom. There's a similar tongue-burning experience to be had with the hot soup contents and filling is not too dissimilar to their skinnier, steamed counterparts. Comparatively, there's a much higher dough to filling ratio in these, hence my preference for the xiao long bao but for a filling snack high in taste value, these pan fried versions are the go.

Who would have thought such fragile and delicate foods could make you so crazily and wildly full for less than $10 per head? The value for money is mind-boggling and justification enough for the west-ward trek. On the bloated bellied-stumble back to the car we pass by more mind-boggling value and 'delicacies' in a butchery. Such is the fragility of life. Pig's tongue next to chicken feet

I hear ya - pig's what?!
I think it's intestines