Noodle up - Part I

There's nothing like stepping out of work into sunshine. Yes, I adore daylight savings. And there's nothing like that first beer after work. Indeed, the beer almost congratulates you on a job well done/getting out on time/not cracking it during that meeting/for just being you. And it only gets better when you're out in a park surrounded by stalls of food. It's Night Noodle Market time! 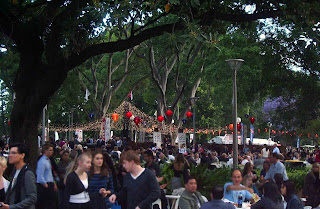 Night Noodle Markets at Hyde Park North, Sydney
The crowds are ever present and the clouds menacing, but there's plenty of seating, loads of food and a seriously charming Coopers beer garden for which a beeline is made. Getting up an appetite for noodles and all other manner of Asian snacks is my excuse; not that I need one. 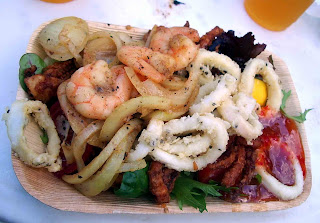 Mixed platter from Seafood and Eat It (?)
The natural visual advertising that happens when someone walks past with a plate of seafood is pretty powerful. We're drawn to the piles of calamari, prawns and octopus like those annoying bogong moths to one's face. The calamari rings are tender and light, the tentacles packing a bit more flavour and crunch, and the garlic prawns firmly holding their own. With that platter and a Coopers Pale Ale in hand, that dark grey storm cloud doesn't worry me at all.

I must say that dim sum doesn't do it for me as a dinner item - and there's a lot about. Perhaps I'm too stuck in my ways, but har gao and BBQ pork buns just aren't my idea of dinner. On the positive side, it reduces my food choices, and for the indecisive personality - that's great. 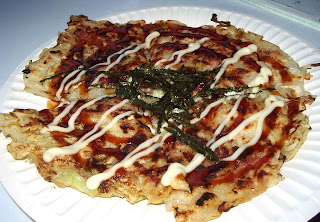 Bacon and potato okonomiyaki from JapanCake

A gorgeous kimono-clad female takes orders at the okonomiyaki stall, which proffers beef and cheese, bacon and potato, or vegetarian options. While the cheese addition sounds a little left of convention, the bacon and potato pancake turns out to be 'what we like' just fine. The pancake is cooked to a moist-inner, crunchy-outer state with the bacon bits scattered throughout and doing their thing. It's scrummy but I wonder: would everything taste this good if it had okonomiyaki sauce and Japanese mayonnaise? Quite possibly.

The tables become noticeably scarcer and the queues longer as the evening goes on to its darker side. The air is undoubtedly festive - the fairy lights, lanterns, lion dances, random beetle on my head - also probably due to the fact it was Hump Day (Wednesday) and that it wasn't raining.

Now, just one guess for the following stall, at which the queue continuously snaked at least 50 keen outdoor diners? 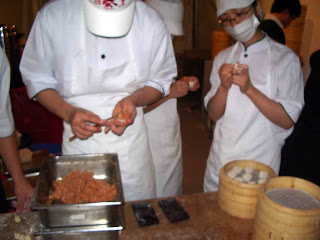 Dumplings made on site
It is the unmistakable, the one and only, Din Tai Fung. And indeed, their xiao long bao which they've taken the liberty of proclaiming as "the world's tastiest dumpling". I've yet to try all the dumplings of the world, but I imagine these are somewhere up around there. 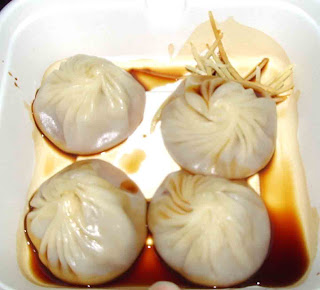 Xiao long bao or pork dumplings from Din Tai Fung
These dumplings are smaller than the offerings at the actual restaurant, but given it's festival fare and the smaller size would cook faster - fair enough. In fact, it seemed they couldn't cook fast enough as it was definitely one of the longer and slower queues at the market. But arguably, a worthwhile wait - with beer for sustenance, of course.

Four of these freshly made and steamed mini dumplings in vinegar sauce and ginger strips disappear pretty quickly after receipt. The only complaint is that the delicate pastry skin has a terrible tendency to stick to surfaces (hence the fabric lining at the restuarant) - in this case, the foam dish. Sticking leads to tearing which leads to leaking of the prized soup which leads to drinking of said prized soup along with vinegar sauce out of the container. 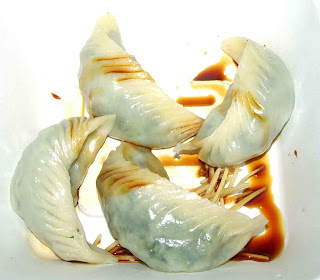 Vegetable dumplings from Din Tai Fung
Not quite as delicate, nor delicious, as the pork dumplings are the vegetable option - strong with greens and a pickled vegetable too. Served with similar condiments, the herbivorous option falls short of the xiao long bao highs. Fittingly, we drift away from the markets to the Sydney Life photo exhibition further down Hyde Park. Definitely recommended if you can pull yourself away from the stalls.

The Night Noodle Markets are on for the rest of this week (Mon-Fri only) and next week too. Get your noodle on!
Posted by Tina at 11:06 AM

That seafood dish looks great! I had some of their food at the Italian Festival and it was delicious but I can't figure out if they have a restaurant or not! :P

Hi Lorraine - It was scrummy! I don't think they have a restaurant but I've seen them at numerous festivals before.