As a lifetime Sydneysider, I'm still impressed almost every time I see the Harbour Bridge. It must be some childhood reflex to gasp in awe or smile with pride upon each sighting of our oversized coat hanger; whether it's that rare trip over the bridge, drinks at Opera Bar or even that perfectly cropped, northern view while crossing Pitt Street every morning. It's especially difficult not to be overcome with proud appreciation at Cafe Sydney.

Ascending the elevators at Customs House to the darkened reception, we're led to the deck where there's an uninterrupted panorama of Sydney harbour on a bone-chilling but cloudless winter's night. Thankfully the heating has been cranked up, combatting some of the open airiness and chill. Add to that a chilled but eventually warming bottle of Adelaide Hills' Maestro Pinot Grigio and a thorough menu, and it's not too long before we feel flustered with indecision - helped along with a waiter's suggestion or two.

Not quite the winter opener but quintessentially 'Sydney', we start with freshly shucked Sydney rock oysters on ice with eschallot and caramelised cabernet vinegar. The molluscs are beautifully fresh, oozing with a sweet creaminess that's almost bowled over by the vinegar hit of the dressing. 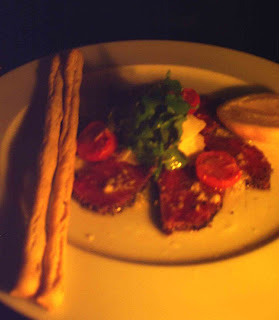 Peppered wagyu carpaccio, truss tomatoes, pecorino, rocket and horseradish, lemon
dressing from Cafe Sydney, Alfred Street, Sydney
After a subtantial amount of deliberation over the entrees, we've whittled down to two that almost represent opposite ends of the spectrum. The wagyu carpaccio arrives as a pretty and vibrant arrangement of its ingredients, served with stunning grissini alongside. I mostly pick at the rocket and pungent pecorino of this dish. 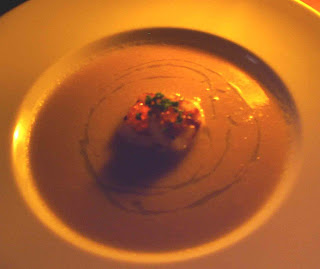 Sweet corn soup with scallops, roe, chives and lemon creme fraiche
The soup, on the other hand, should be the winter warmer - with scallops instead of yabby tail this evening - but only rates as a lukewarm menu item. The sweet, if not slightly bland, soup is dotted with corn kernels, the only redeeming aspect being the creme fraiche hidden beneath the somewhat overcooked scallops. The roe had a fantastic popping quality that was at odds with the soup but improving on the scallops. 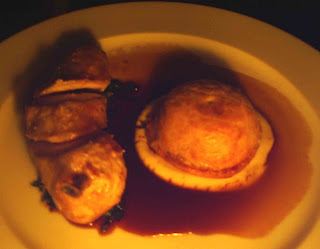 De-boned spatchcock with Swiss brown mushroom, leek and thyme pithivier and jus
After an appropriate harbour-gazing and full-house people-watching pause, mains arrive to our battery-powered candlelit table. Saying that, I'd love one of those glossy candle-like lights for myself. In what looks like an Aussie-spirited pie and sausage roll, the spatchcock is deemed tender and juicy, pairing nicely with a meat-filled pithivier 'pie'. 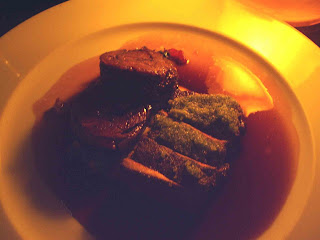 Herb crusted lamb loin with confit shoulder, rainbow chard, Jerusalem artichokes and jus
My choice of the lamb arrives two ways: a medium-rare grilled loin with a too-subtle herb crust and a flavour-packing confit of shoulder which came away with the fork alone. The jus helped mask the strong gaminess of the tender loin meat as did the creamy puree of Jerusalem artichokes beneath the chard and other diced vegetables. A side of a rocket and parmesan salad ups the vegetable count.

Now it would seem that either eating out is well and truly back on the agenda for recession-fighting locals, or tourists are like moths to the light of Sydney winters - for the "time restriction" on our table was approaching and it looked like we were to be booted out. I know nothing about restaurant management, but this is a very unlikeable practice that I'm seeing more and more.

Relocated to some pretty comfortable and nap-worthy seating directly in front of the bar, we fight the urge to express dissatisfaction and instead order desserts from an enticing menu, watching cocktail bartenders in action as we wait. 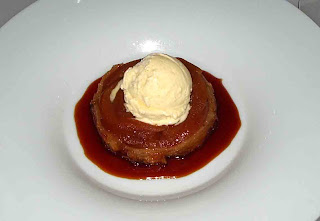 Caramelised quince tarte tatin with honey ice cream
Admittedly pretty full after all the savoury food, I confess to wanting three of the six desserts on offer. Gluttony is a sin, I'm told, so it's just the quince tarte tatin for me, crouched over a low bar table (at least it's only dessert, unlike the two-course meal happening next to us in hunch positions). The honey ice cream has me in a complete buzz while the quince has a touch of bitterness counteracting the sweet syrup and the buttery pastry that's relatively light. 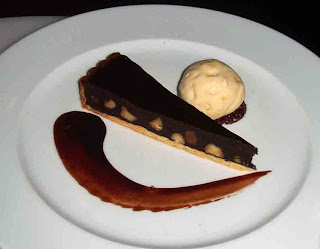 Kicking back on our now vantage-less seating, we further witness occasional service inconsistencies and thinking back on the meal, conclude that stunning views and location come at a cost. But when it's the Harbour Bridge and twinkling gem of Sydney harbour, it's just maybe worth the detour and a course in appreciating home.

I'm another constant gaper at the Sydney Harbour Bridge! You'd think that seeing it coming into work on the ferry every day would get that out of my system, but not, not yet. I've heard so many varying opinions on Cafe Sydney from amazing to horrible. I'll have to give it a vist I think to try it out!