I love a good tart. Cakes are lovely but there's something about the harmonious relationship between pastry and a filling that makes a tart ever so pleasing and delicate. Most tarts, anyway. I have a disposition for frangipane tarts, which I've had before I even knew what frangipane was. And, I also have this terrible habit of taking shortcuts and making adaptations to recipes - you'd think I'd learn after numerous kitchen disasters. 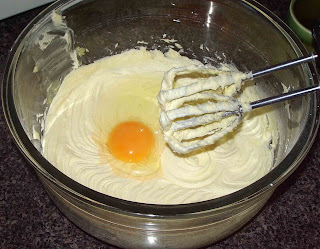 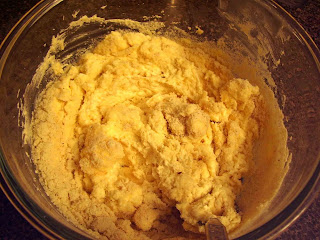 Adding almond meal into butter, sugar and egg mixture
It's then the addition of almond meal, which is a new ingredient to me. It smells quite fragrant though I forget to have a taste before adding it all to the mixture. I continue to mix with a spoon, putting out of mind any thoughts about fat content and the like. 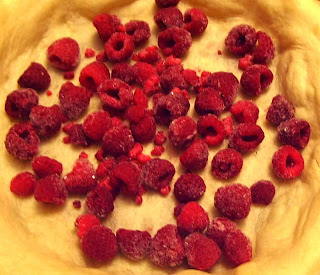 Raspberries into the tart case...
At least there's nuts and fruit - they're healthy. I try not to eat all the raspberries straight from the freezer pack, instead putting them in the base of the baked pastry case. Next time, I thik I would mix them through the frangipane filling instead. I cheated and used store-bought shortcrust pastry rather than making my own. Pastry and icing are long-time foes of mine.

Off topic, I think frozen raspberries make a lovely and healthy, albeit slightly expensive, snack for summer time or even winter as in this case. I think the remainder will go into pancakes, if not straight into my mouth. 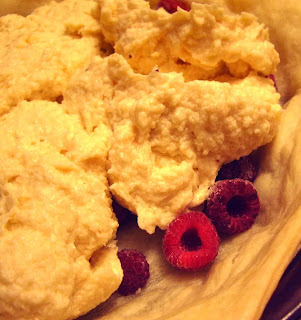 ... and frangipane filling on top
I plop the frangipane filling into the pastry case in what looks a less than pretty sight. With no raspberries visible, it looks rather bland and unexciting. But it's not all about looks, is it? Especially when it comes to tarts. 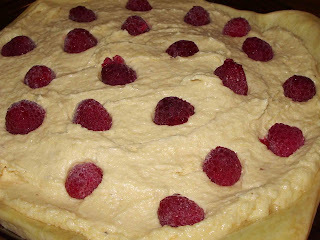 A few more raspberries for the top

A few additional raspberries on top pretties up the picture and at this point I'm quite excited and can't wait to taste the creation. In what the recipe describes as 25 minutes in the oven turns out to be almost double that. I'm not sure if my tray is not as wide as a tart ring or if my oven is a little on the mild side, but it was a lengthily-watched oven and tart before the wobbling, jiggling centre disappeared. 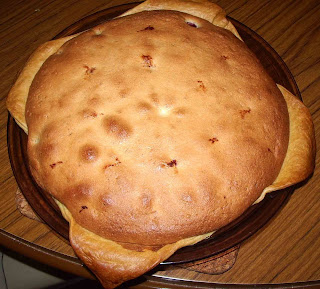 The baked tart
This was not how I envisaged the tart in my mind. Aside from the 'too lazy to cut the corners (oxymoron?) from my square of shortcrust pastry for the round dish', I was thinking of red raspberries popping out the top of an evenly golden surface. Not quite, as the raspberries submersed themselves quicksand-style in the dark edged filling. Oh well. 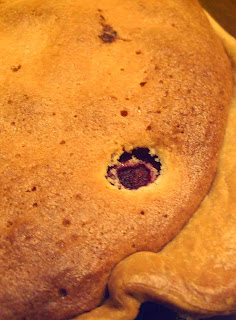 The only visible raspberry after baking
I was a little scared to bring a knife to the tart, with visions of deflation or liquid insides on mind. There was quite a bit of moistness towards the centre of the tart, but the overall seemed adequately cooked. And in the most important test of all? 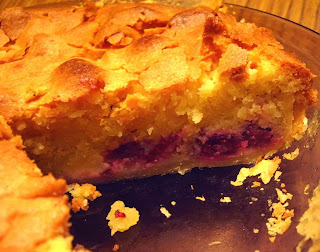 Sliced raspberry frangipane tart
It was edible. I loved the slightly sour contrast of the cooked raspberries to the filling, although their very berry presence on the bottom made the pastry a little soggy. The flavour of the almond meal is a little overpowering in the first mouthful, gradually overtaken by butteriness and sweetness, with a final hit of egginess. No points for guessing the ingredients in this tart!

In the end, I think a short and sweet pastry would have made a difference, as it's a key part to enjoying a tart as opposed to a soggy pastry. I would explore other recipes for frangipane, remaining aware of the powerful flavour of almond meal as too the fact that many recipes call for excess amounts of butter. Tucking into another slice with a cup of tea, this tart has learnt a good lesson in tartiness.
Posted by Tina at 8:18 AM

We made a lovely tart with frangipane for Daring Bakers a couple of months ago. http://melanger.wordpress.com/2009/06/27/daring-bakers-challenge-bakewell-tart/ If you like the taste of frangipane, you should try this. And the pastry? Though a few more steps then using store bought, it was so simple you really couldn't go wrong. Lovely combination of flavours though. I'm with you on the raspberries!

Hi Julia - Thanks for the link. It's probably definitely worth a little more effort for the pastry..!

oooh i looove raspberries! yeah my raspberries always sink in my tarts so lately ive been adding the raspberries on top about halfway during the baking in da oven so they dont sink as much?

I love tarts but I've yet to make pastry from scratch

Hi chocolatesuze - Ha ha, my problem is if I don't put them in at the start, I'll eat them all before they make the cake!

Hi cashmere cheesecake - I know! The pastry is SO much effort...!