The remains of winter

Mornings and nights are still convincingly wintery, especially when overcoats and outdoor heaters are still required. But it's apparently getting close to spring, and after this weekend's weather, I think I believe it.

It's the final remaining weeks of winter and the final run for Merivale Winter Feasts. I find myself at the ivy's wine bar, Ash St. Cellar, one night; chasing the great value in their winter deal yet seduced by the worldly wine list. Early in the evening, Ash St. Cellar is speckled with wine sipping tables and a few tapas munchers, eventually filling to an amiable buzz. The space is inviting like few other Sydney venues, and certainly helped along by the glass of sauvignon blanc and bread with oil and salt flakes to start the meal. 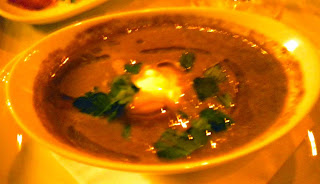 Mushroom soup with creme fraiche from Ash St Cellar,
the ivy, George Street, Sydney
In honour of winter and its chilly nature, I've ordered the mushroom soup, which looks a little less photogenic than the other dishes. A pretty crown-shaped bowl holds a thick brown soup with a dollop of creme fraiche, some torn basil leaves and a glug of olive oil. The soup isn't too creamy nor rich but immediately warming; a truly wintery dish with the occasional slippery slice of mushroom for texture. 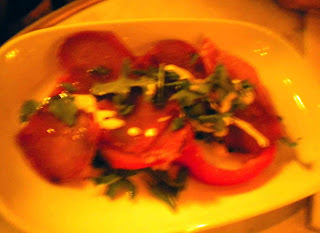 Tuna belly salad with tomato, capsicum, rocket
The tuna belly was not at all as imagined. Being somewhat accustomed to sashimi and its appearance on menus ranging from modern Australian to Spanish, the cured, prosciutto-like texture of the tuna was a definite surprise. Salted and dry, shaved thinly and served with deliberately sweet vegetables, the salad was a new taste experience that was exciting but falling ever-so-short of satisfaction. 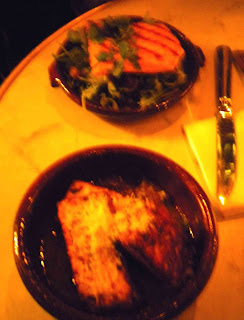 The next dishes started to up the ante and while the terracotta tapas plates were small, the dishes were deceptively filling. The ocean trout was a generous fillet cooked to perfection, resting on top a of savoury mix of leaves and croutons. The simple flavours of the orange fish were a highlight, as too its just-cooked texture.

The baked ricotta was a first for me and delightfully memorable. Three chunky golden blocks of a creamy, herb-inclusive ricotta sat balanced atop sweetly cooked tomatoes, topped with - yes, more cheese - grated parmesan. The soft white ricotta was encased in an almost-crisp baked skin that married well with the juices of the tomato. A thin crisp bread would have been nice on the side, but the way I was guarding and savouring my cheese, I think I was pretty happy with it.

It's here that we re-requested the wine list, which has a page or two of whites and reds that come by the glass, carafe or bottle, then several more pages of sparklings, whites and reds by the bottle - divided into easy to navigate categories a wine novice could easily master. I really like this open and welcoming attitude to wine knowledge; a bit DIY with sommeliers on hand when needed. The Chateau Poitevin merlot and cabernet blend was "full bodied dark fruit with firm structure" and the perfect companion for the wait for desserts. 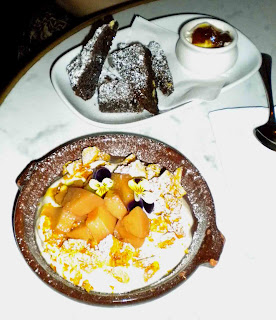 Chocolate brownie (top) and baked quince with honeycomb and custard (bottom)
The chocolate brownie was appropriately rich and fudgey, but a little pedestrian for my liking. Even served with cream and a kumquat compote-like blob, it had nothing on the baked quince with honeycomb and custard. From first appearance, the quince dessert was impressive. Pretty with its charming violet flowers, it promised a sugar hit with its abundance of honeycomb pieces and offset with a light vanilla custard. These disparate ingredients worked together melodiously to have the tasters humming with appreciation, although I couldn't bring myself to eat the violets.

Thoroughly satisfied with dinner at a wine bar, we uninterruptedly polish off the bottle through conversation (thankfully muffled to those surrounding by the jazzy but not non-descript music) and smooth smiling service. The few remaining days of winter could be well spent with a few more visits to Ash St Cellar - and I get the feeling that may run through to spring and summer too.