I've been told before that if you say out loud what you want, you'll get it. I was skeptical when I first heard it and I'm still skeptical about it. What does that say for birthday wishes when you're not supposed to tell anyone?

And aside from realising that there's a lot of internal muttering happening in my head, I don't see my million dollars, Jimmy Choo's or round-the-world plane ticket. Perhaps there was small print. Perhaps the voiced desires are more a motivation tool or 'cry for help' rather than click-of-the-fingers, genie stuff. Too bad it's not all as easy as pressing a button, like it is at Madang. Press, speak up, get it - beautifully simple stuff.

We endured the obligatory Friday night wait by leaving the dark laneway - raffle ticket in hand - and heading to the nearest pub for a drink and snack. At least 30 minutes later our number still hadn't been called, so pity the souls who actually wait outside the restaurant huddled around an outdoor heater.

The atmosphere inside is immediately warming and lively, doorbells going off every few seconds or so above mostly group chatter. The banchan starters are hurried over to our waiting appetites after not long and never fail to delight with their seeming random-ness and ever-changing variety. 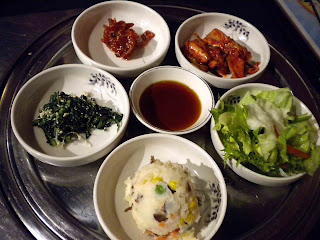 Banchan at Madang Sydney Restaurant, Pitt Street, Sydney
Tonight we have, starting from the top left, a particularly spicy kimchi radish in soft, thin strips. Next (clockwise) is the normalcabbage kimchi; a good level of chilli heat for me. Then my favourite butter lettuce leaves with still undetermined puree on top - there must be raw onion in it because the aftertaste is really quite strong, but it's also a bit sweet and very refreshing. The most novel banchan is the ice cream scoop of mashed potato colourfully dotted with peas, corn kernels, diced carrot and cubes of apple. We're reassured it's not ice cream but it is, nonetheless, an odd mouthful. And finally, a spinach dish sprinkled with sesame seeds. 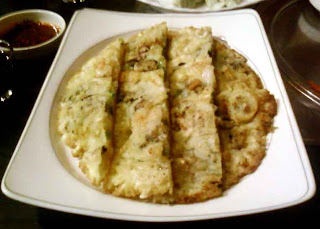 Seafood pancake
I can't go to Madang and not have their seafood pancake. Call it an addiction or obsession, if you will. Every bite is a guranteed pleaser: if not some squid or prawn, then it'll be some well-cooked spring onion or golden crunchy dough smothered in the chilli dipping sauce. 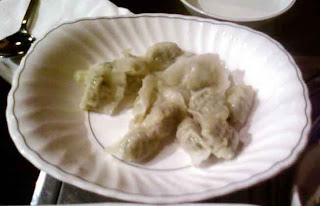 Steamed dumplings
It's the first time I've tried these steamed dumplings, as I tend to favour the fried versions normally. These are very similar to Chinese wonton, although the pork filling is distinctly different. These morsels are bite sized and disappear frighteningly fast. 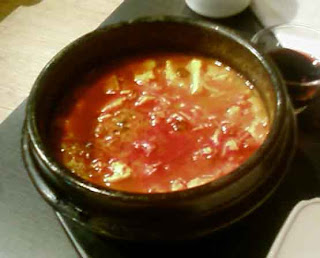 Spicy tofu and crab soup
For a chilly night, nothing beats a boiling hot and spicy soup. The combination of tofu and crab sounds divine on paper but is even better in tongue-scalding real life. Equipped only with metal soup spoons, it's devourer beware as the chilli gets you if the heat doesn't. I actually discover several decently sized chunks of crab, not imitation crab stick, which lends a certain sweetness to the soup beneath the spicy flavours.

Now looking back, it seems quite a light meal but I guess numerous refills of the banchan, the bottle of Korean raspberry wine (like Ribena - which I know is blackcurrant - gone 18+), and the sneaky bowl of chips at the pub (with what seemed like cupfuls of tomato sauce and aioli) might have played a part.

Sated and smoked we depart, wishing that life were only as simple and straightforward as ordering in a restaurant. I guess it comes back down to the same ever-challenging problem - knowing what you want before speaking up.

Ive always wanted to try korean food. When i walk through strathfield i always wonder wat everyone is eating! The only korean food ive ever had is K bBQ loL!!

I'm always wanting to try more korean food but im always clueless. Will think of you next time ^_^

Hi Leona - My friends and I eventually got bored of Korean BBQ so now we try everything else on the menu. To be honest, I think the non-BBQ stuff is better...! :)