The automatic response to the question of "How are you?" is usually along the lines of "I'm fine" or "Good, thanks". Positive answers, if not a little robotic. There was a point a few years ago, I think, where "Same same" was becoming a similarly mechanical response, but obviously not so much on the positive end of the scale. They're all different answers that essentially avoid proper discussion about how one really is. And fair enough, I say, because sometimes there just isn't anything to say about a particular topic.

Down the newer end of Dixon Street is a collection of new-ish Asian restaurants, and within, a collection of Uighur cuisine restaurants. There are in fact three in a row - or as it turns out, two and one on top of another run by the same people.

Apandim Uighur is the more presentably decorated upstairs restaurant above Uighur Cuisine. The only way I cottoned on to that fact was that the menu from the smaller restaurant had somehow made its way to another table - probably for its pictorial attributes against the Uighur/Chinese/English text menu of Apandim Uighur's menu. For the full interior-decorated and presumably-Uighur karaoke experience, I recommend the flight upstairs. 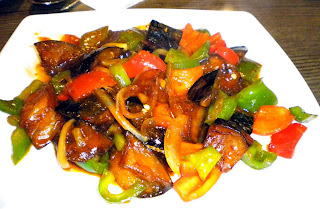 Pidigan kormisi - stir fried eggplant - from Apandim Uighur,
Dixon Street, Haymarket
In what seems to be no particular order, the food arrives fairly quickly after a lengthy assessment of the borrowed picture menu. The stir fried eggplant dish is a burst of colour, with golden cubes of fried eggplant playing it up with red and green capsicum and onion. It's a little sour, a little tomato-ey and a smidgen spicy. There's quite a lot of sauce which makes me momentarily regret not ordering rice. 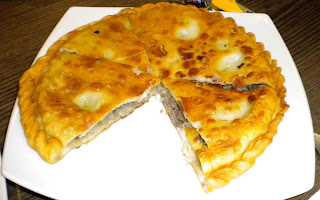 Gosh nun - lamb meat pastry
The gosh nun is a pretty round of pastry with pinched edges. Sliced pizza stlye, we dig in hastily half- expecting the kind of rapturous joy one gets attacking a pizza or pie at very hungry hours of the day. The result is ever so less satisfying. Instead of thankful fulfilment, we get a bland, oily, sort-of gamey deal which cries out for tomato sauce. The pastry is somewhat a redeeming grace at least, but some sort of seasoning wouldn't go astray. Koy gosh kawapi - lamb skewers
The lamb skewers appear to be a signature dish, or at least a very popular dish that every table seems to order. And it really isn't any wonder why. Five kebabs on razor sharp flat bladed skewers arrive at the table (for four) and are quickly wielded to devastating effect on our appetites. The entire table is mostly impressed with the tender cubes of lamb, although the heavy application of cumin is a bit much for some. It has a bit of chew and flavour that gives you no doubt that this is lamb as it should be. 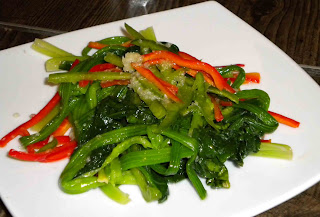 Palad hum sai - salted spinach salad
For the necessary greens we pick a salad from a range that is way left of centre. The salted spinach salad sounds appropriate, but only upon tasting do we realise the deadly accuracy of the menu description. It's salty. Actually, it's also very garlicky, which the menu doesn't give away. But the extreme saltiness gets to a point where we steal/borrow the bottle of water from the neighbouring table; although eating the spinach with some of the blander dishes that follow worked a bit of a treat. 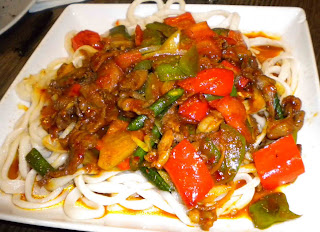 Hakiki guiru laghman - stir fried noodles
The noodles come to the table on a huge square dish covered in a reddish meat and vegetable stir fry mix that looks suspiciously similar to the eggplant dish we had earlier. Suspicions are confirmed upon tasting - it's almost identical to the eggplant dish except the substitution of lamb for eggplant. The noodles have a lovely chewy texture although suffer from lack of exciting seasoning, if seasoning much at all. Which is where the oversalted spinach salad came in handy. 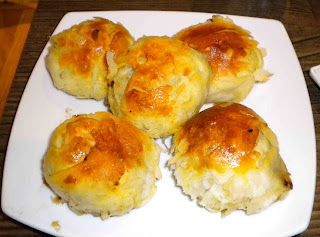 Kakat samsa - meat samosas
Finally the meat samosas arrive, to an admittedly pretty full table. The flaky golden pastry gets everyone in though, to some sort of misled advertisement of crunch. Rather than the envisioned crunchy and light pastry is instead a dry yet soggy texture that brings up connotations of microwaved food. The eyes can't believe that the golden exterior has completely fooled them. The meat filling inside is oddly similar to the filling of the gosh nun earlier - just in a more disappointing casing.

Given the full house at the restaurant, I concede that we may have just ordered poorly. Those seemingly in the know were ordering stewed and braised dishes which sound less interesting but arrive at tables in massive round but shallow plates - mopping up the juices with bread even. Of which we'll have to attempt another time as long as things aren't same same again.

Oh that's disappointing :( I hate when the food looks good, but then tastes crap! But I guess it is hard to order especially when you're not experienced with the cuisine... I know it is for me!

Hi Betty - It is difficult, but at least now we know better for next time...!

A bit of a shame about your experience. Sometimes I feel that way about places too - it's so popular I must have just ordered the wrong things! The lamb skewers sounded good though!

Seems like a bit of a hot and miss affair. I just got back from China and tried a few things from this unique cuisine, which I liked. Now I want more here, back in Sydney

Hi John - There's a couple of places around Chinatown that do this sort of cuisine - an adventure in Sydney, in my view ;)

The braised thing on large shallow dish is a chicken noodle dish. Its another signature dish along side with the lamb skewers. The restaurant is popular because northern and western Chinese are accustomed to the taste and this style of greasy spoon restaurant. you are bound to be disappointed if you go in with your taste for pizzas and pies.